A China-Russia Alliance in the Eurasian Arctic? 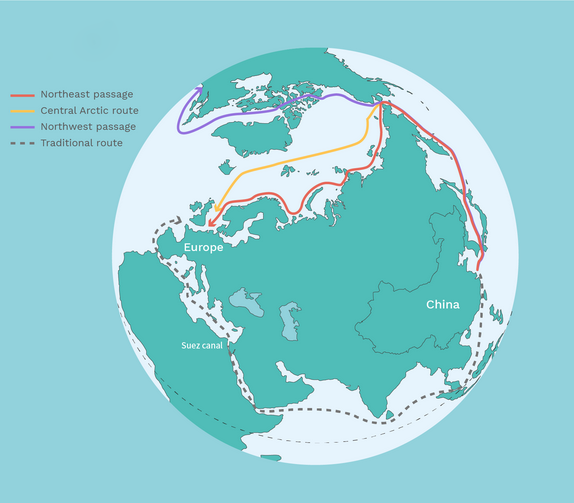 The Arctic is becoming the cockpit of the world for three central reasons:

Opportunities in the Arctic are now of global importance. The AC’s decision-making process and governance of the region is therefore increasingly influenced by non-Arctic states - and no longer just the AC. Russia is China’s sponsor in the Arctic

Unintended consequences of Russian Sanctions in the Arctic: There is a deepening and widening Sino-Russian relationship in the Eurasian Arctic and the main beneficiary of Western sanctions on Russia in the Arctic will be China.

Russia priority in the European Artic has changed from Securitisation to Militarisation. Sanctions have failed to restrain its freedom of movement and have, if anything, accelerated Moscow’s plans to unfold its Greater Eurasian Project strategy whilst concurrently facilitating and benefiting from China’s Ice Silk Road backed Arctic infrastructure and financing initiatives (e.g., NSR).

US/EU commercial withdrawal following sanctions — especially Big Oil — has left neither power with any kind of strategic geo-economic leverage over Russia in the Eurasian Arctic region and has created an economic vacuum which China is steadily filling.

Tim’s PhD from the Scott Polar Research Institute, Cambridge, addressed the geoeconomics and energy relations between Russia and China in the Eurasian Arctic. He is the founder of the UK-based Arctic Advisory Group consultancy firm. Previous career appointments include Government Affairs Adviser to Shell Gas & Power in Russia/Ukraine, as well as working in the Caucasus, Central Asia, Russia, and Ukraine, for companies such as Chevron and JKX Oil & Gas. His first experience of the Arctic was as a young paratroop officer in the 1980s where he was an instructor in Arctic warfare.

Tim is a Russian speaker and was educated at Cambridge and the Moscow State Institute of International Relations. Since the 1990s he has lived extensively in the CIS. He was an expert witness to both the House of Commons Environmental Audit Committee on the Arctic, and more recently, the House of Lords Select Committee on the Arctic. Tim has authored various UK Arctic position/policy papers for the UK government. He currently advises, and is the creator of various recent Arctic scenarios/position papers, for HMG.